The U21 stars have not been on the same level in the first two months of the new season when we compare them to the previous year but things are looking a little bit better after the last week. With 13 wins in 2020, Felix Auger-Aliassime is the leader of the pack, losing early in Acapulco after playing in two ATP finals this year, still seeking that first ATP title.

When that happens, Felix will not be the first player born in 2000 with an ATP trophy in his hands, with the 19-year-old Brazilian Thiago Seyboth Wild conquering Santiago with a wild card to steal that honor ahead of the Canadian who had five chances to lift the first ATP crown before anybody else.

Thiago defeated the players like Cristian Garin and Casper Ruud to grab 250 points, becoming the 12th teenager with an ATP title since 2005 and passing 12 rivals to take the second place in the Next Gen Race to Milan. Miomir Kecmanovic defeated Alex de Minaur in the first round in Acapulco before losing to Rafael Nadal, pushing the Spaniard to the limits in one set as the only player to achieve that in Mexico last week.

Miomir is 15 points clear of Denis Shapovalov who is yet to show his best tennis so far in 2020 after winning just four matches. Corentin Moutet and Jurij Rodionov are the remaining players with at least 200 points (the bar was much higher at this time of the year 12 months ago) and it is the defending champion Jannik Sinner in the seventh and the last spot that leads directly to Milan.

Emil Ruusuvuori, Alex de Minaur and Alexei Popyrin are next in the line, hoping to grab some notable points in the upcoming weeks and pass the rivals in front of them, with just over 200 points separating the second and the 12th players on the list. 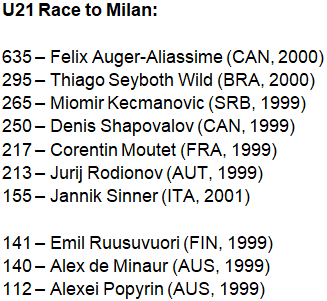