In the last 23 years, Alex Corretja, Patrick Rafter, Paradorn Srichaphan, Roger Federer and Rafael Nadal were the only winners of the award voted by the players themselves, with Federer and Nadal taking every single one since 2004!

Nadal earned it in 2010 and 2018 while Federer grabbed all the remaining years (although it is not entirely clear what you have to do to find yourself on the list), receiving the award for the 13th time in 2017. After winning it in 2018, Nadal was nominated for the 2019 season together with Roger Federer, Dominic Thiem and Diego Schwartzman.

Joking on Twitter, world no. 1 asked if he can win it again this year, with a straight-away comment from Stefanos Tsisipas who said that the award goes to Roger Federer for the 68th time ina row! Nadal, Federer and Tsitsipas all had some rock-solid results in 2019 to wrap it up inside the top-6, with Nadal claiming two Majors and two Masters 1000 crowns, Federer who went all the way in Miami and Tsitsipas who conquered the ATP Finals on his debut.

Tsitsipas is in the Most Improved Player of the Year category together with Felix Auger-Aliassime, Daniil Medvedev and Matteo Berrettini, hoping to win the award after a stellar week in London and the ATP Finals crown in his hands.

There, he played against both Rafael Nadal and Roger Federer, losing against the Spaniard but beating the Swiss in the semi-final to stay on the title course. 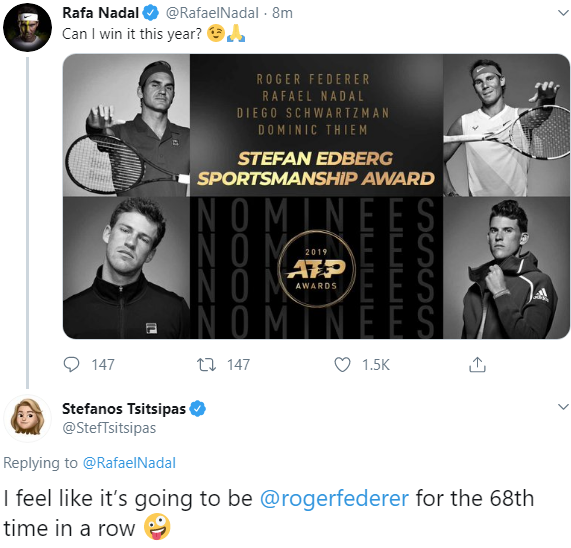