For the second year in a row, there are no players with 60 ATP wins, as the leading five players all finishing within six triumphs separating them all. The only other Open era season without players who achieved 60 victories on the Tour was the first one, an incomplete 1968, which tells enough about how competitive the men's tennis was in 2018 and 2019, at least outside Majors.

Daniil Medvedev missed the opportunity to break the spell and reach the magic number, suffering four straight losses in Paris and at the ATP Finals to finish an incredible season as the leader of the pack with 59 wins. World no.

1 Rafael Nadal notched 47 wins by the US Open where he claimed the 19th Major crown, adding one in Geneva at the Laver Cup and skipping all the action ahead of Paris. There, the Spaniard grabbed three victories before withdrawing ahead of the semi-final clash with Denis Shapovalov, heading to the ATP Finals where he defeated Daniil Medvedev and Stefanos Tsitsipas, attacking more wins to his tally despite failing to reach the semis.

With 53 triumphs under his belt, Rafa went home to Madrid where he led Spain at the Davis Cup Finals, delivering marvelous performance to score all five singles triumphs and pass Roger Federer, Stefanos Tsitsipas and Novak Djokovic who completed the event with three victories, not enough to stay ahead of Rafa on the year-end list.

In the first match in front of the home fans, Nadal toppled Karen Khachanov 6-3, 7-6 after grueling two hours and ten minutes, enjoying a more relaxed day at the office versus the Croat Borna Gojo whom he ousted 6-4, 6-3 in an hour and 25 minutes.

Playing better and better as the tournament progressed, Rafa demolished Diego Schwartzman 6-1, 6-2 in the quarter-final in exactly an hour, dominating on both serve and return to keep his country in contention ahead of the doubles clash.

In the semi-final, Rafa took down Daniel Evans 6-4, 6-0 in another must-win rubber, prevailing over the Britons with Feliciano Lopez in the doubles encounter to propel Spain into the final. There, world no. 1 defeated Denis Shapovalov 6-3, 7-6 to secure the second point for Spain and celebrate the sixth Davis Cup title in front of the home fans, finishing another historic season on a high note. 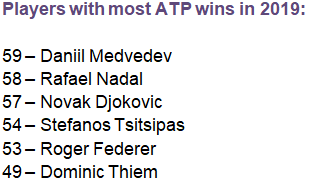