Roger Federer wrote history at the Australian Open on Friday night, becoming the first player with 100 triumphs at the first Major of the season. Already achieving that incredible feat at Wimbledon last year, Federer is the only player with a "century" at two different Majors, with no one to join him on the list at the moment after 98 wins for Jimmy Connors at the US Open and 93 for Rafael Nadal at Roland Garros.

Roger is playing at the Australian Open for the record-breaking 21st time, reaching at least the third round every time he visited Melbourne and winning six titles down under, the most recent ones in 2017 and 2018. The Swiss had to work hard to grab that 100th victory at Melbourne Park, ousting John Millman 4-6, 7-6, 6-4, 4-6, 7-6 after four hours and three minutes of an epic battle.

John defeated Roger at the US Open 2018 and gave his 200% in front of the home fans at Rod Laver Arena, throwing everything at Federer and missing a colossal chance in the match tie break where he led 8-4. Millman claimed four breaks and suffered only three on the other hand, making a great start and bouncing back after losing sets two and three to force a decider where he chased Roger all the time.

The Swiss made too many errors, struggling to break the rival's resistance and using all of his experience to cross the finish line first after that tight match tie break. Federer will now face Marton Fucsovics in the fourth round, having a day off on Saturday and trying to recover energy and boost that he spent to leave Millman behind on this historic night in Melbourne. 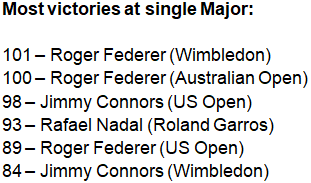 TODAY'S MOST POPULAR
RAFAEL NADAL
Lorenzo Sonego makes big claim about playing Rafael Nadal on grass
Tamara Korpatsch tests positive for virus day after posting selfie with Rafael Nadal
Stefanos Tsitsipas opens on his relationship with Mark Philippoussis
'If you tell him something, Roger Federer will...', says top coach
Nick Kyrgios: "If I had done that, I would have been fined"
Nadal and Djokovic could lose Wimbledon to Kyrgios due to 3 reasons, per Mouratoglou
'Rafael Nadal slapped me on the shoulder and...', says WTA star
'Hearing that from Rafael Nadal is...', says star
'They have a small chance of beating Rafael Nadal', says top analyst
'Rafael Nadal got ahead on the scoreboard without...', says top coach
THIS WEEK MOST POPULAR
WTA TENNIS
Wimbledon finalist physically harassed “at least 30 times” by staff, speaks out
Simona Halep opens on her relationship with Emma Raducanu
Rafael Nadal makes retirement admission after Wimbledon victory
Rafael Nadal responds to comments Serena Williams made about him
Jon Rahm and Rory McIlory change positions
Wimbledon 2022: ill for a ball boy, Jodie Burrage blocks the game and saves him
'I have beaten Rafael Nadal in all our matches on...', says former star
Three new names decided to perform at LIV Golf!
Novak Djokovic: 'I did hear unofficially that some people...'
Rafael Nadal: 'I made a training disaster'