Pumped and motivated after the first Grand Slam crown in 2003, Roger Federer embraced the first dominant season a year later, winning 74 out of 80 matches and conquering the ATP throne after the Australian Open. Roger claimed 11 titles, becoming the first player since Mats Wilander in 1988 with three Majors and adding three Masters 1000 crowns to stand in the league of his own and shape the domination that would last until 2008.

Tim Henman, Rafael Nadal, Albert Costa and Gustavo Kuerten were the only players who had defeated Roger before the summer, with the Swiss conquering Halle, Wimbledon and Gstaad before heading to Toronto for the start of the North American hard-court swing.

Federer was the favorite at Canada Masters, losing serve thrice in six encounters and ousting world no. 2 Andy Roddick 7-5, 6-3 in the title match for the fourth Masters 1000 crown and the 23rd straight victory! It was already the eighth clash between these two and the seventh win for the Swiss who also celebrated in the final of Wimbledon a few weeks earlier.

The encounter lasted for an hour and 25 minutes and Roger repelled all four break points to mount the pressure on Roddick. The American couldn't deal with it, missing the opportunity to do more damage with his forehand and not doing enough with his serve either to stay in touch with the world's leading player.

Andy had an enormous chance to conquer the opening set, earning three break points at 4-4 before Roger repelled them all in style with three aces.

They both raised the level in set number two and the Swiss who crossed the finish line with a single break at 4-3.

The second serve was one of the crucial elements of the match, with Federer taking 19 out of 27 points and erasing every break chance he faced, stealing almost 40% of the return points to convert one break point in each set.

Another segment that ruined Andy's chances for a better result was his forehand, spraying 16 unforced errors and many of those in the pivotal moments that could have turned the scoreboard into his favor. The third fundamental advantage on Roger's side was reflected in the service winners department, where Roddick failed to follow the rival's pace, especially in the second set when Federer returned all but three serves of his opponent.

Roger was 24-15 in front in unreturned serves, hitting 12 in each set while Roddick got reduced from 12 to three in set number two, not enough to keep him in contention. The Swiss had an almost identical number of winners from his forehand, backhand and volley, finishing with 19 direct points from the field that slightly overshadowed Andy's 17, seven from his volley.

Overall, Federer had 43 winners while Roddick counted on 32, having to tame his groundstrokes in the best possible way to overcome that deficit, the task he couldn't achieve on that day. Andy sprayed 25 unforced errors, 11 more than Roger, doing a fine job in the forced errors department where he had the advantage, hitting five and drawing Roger to 15.

All in all, the Swiss completed the encounter with 43 winners and 30 mistakes while the American had 32 winners and errors, not enough to earn a more favorable result. Roger won 15 of 26 most extended rallies while Andy had a slim edge in the mid-range exchanges from five to eight shots, 20-19.

Thanks to those service winners, Federer toppled Roddick 41-31 in the shortest rallies up to four strokes, another element that added fuel to his triumph. Previously winning Wimbledon and Gstaad, Roger became the first player since Bjorn Borg in 1979 with three consecutive ATP titles on three different surfaces. 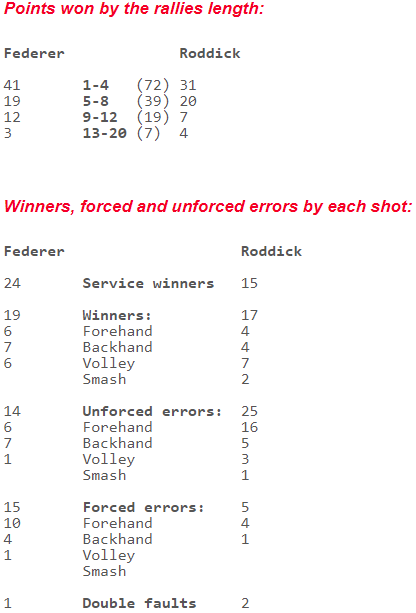 TODAY'S MOST POPULAR
ROGER FEDERER
'Can you imagine if Federer, Nadal, Djokovic was playing during...', says legend
ATP Madrid: Passive Rafael Nadal loses to Alexander Zverev in straight sets
'Rafael Nadal will try everything to beat me after two straight losses,' says Zverev
Rafael Nadal: 'I feel comfortable with the service again thanks...'
'When I played Roger Federer I was a worse player than now', says ATP ace
'I hope that Rafael Nadal wouldn't kill me on the court as before,' wishes Zverev
'Rafael Nadal is still favorite, although I like Madrid's conditions,' says Zverev
THIS WEEK MOST POPULAR
RAFAEL NADAL
Rafael Nadal: "Djokovic leads H2H with me and Roger Federer because ..."
Rafael Nadal loses Madrid Open age milestone to 17-year-old Carlos Alcaraz
'We expected that from Roger Federer, but Novak Djokovic's move came as..' says Lopez
Alexander Zverev attacked by haters after...
'I do not wish to play till 40 like Roger Federer', says Top 5
Naomi Osaka presents her new swim-suits collection
'Roger Federer realized that nothing is certain against Djokovic,' says Novak's coach