The second Major of the season is up and running at Roland Garros, with 128 players battling for the title and tennis glory. As many times before at Majors, Roland Garros is a mixture of the upcoming stars and the experienced players still capable of competing on a high level despite spending over 15 years on the Tour.

Since the start of the Open era in 1968, there have been nine players with at least 64 appearances at Majors, with six of those entering this week's Roland Garros draw. Novak Djokovic and Andreas Seppi stand on 64 Major entries, trailing one to Philipp Kohlschreiber, who used protected ranking to make the main draw.

The Spanish veteran Fernando Verdasco stands on 68 Major appearances, one short of Mikhail Youzhny and two from that magical number of 70, reached by only three players in the past 53 years. The Magician Fabrice Santoro was the first to achieve that, followed by Roger Federer and Feliciano Lopez, the oldest players in the top-100 at the moment.

Still competitive at 39, the Spaniard played his 77th Major event, losing in the first round at his 76th consecutive Major tournament since 2002! Roger Federer has stolen the show and became the first player in the Open era with 80 appearances at a Major event, making a debut in Paris 1999 and remaining competitive for over two decades!

Between 2000-2016, Federer had 65 consecutive Major entries, setting the record that stood in his hands until Feliciano Lopez and Fernando Verdasco bested that result. Roger skipped Roland Garros in 2016, 2017 and 2018 to focus on his grass season, and he couldn't play in three straight Majors after the last year's Australian Open due to a knee injury.

Fully recovered, Roger is back and running at Roland Garros, playing his first Major match in almost 500 days and beating Denis Istomin 6-2, 6-4, 6-3 in an hour and 33 minutes! Playing sharp and aggressive tennis, the Swiss lost 13 points behind the initial shot and kept the pressure on the other side.

Federer pushed Istomin to the limits and converted five out of 13 break opportunities to control the scoreboard and race over the finish line for one of his fastest Roland Garros wins. The veteran fired 48 winners and 20 unforced errors and looked great on the court in only his fourth match of the season, hoping for more of the same in the upcoming rounds. 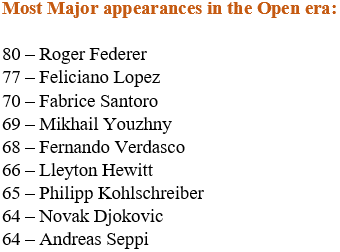