Roger Federer reached his first Wimbledon quarter-final in 2001, failing to score a win at his favorite Major and improving that in the mentioned season following an epic win over Pete Sampras. An eight-time champion has been among the players to beat at Wimbledon ever since, competing in the cathedral of tennis for 22 years and reaching the quarter-final 18 times!

Two decades after the first quarter-final appearance in London, Federer will play in another following Monday's 7-5, 6-4, 6-2 victory over Lorenzo Sonego. A few weeks before turning 40, Federer became the oldest Wimbledon quarter-finalist and the third-oldest player to achieve that at Majors in the Open era after Pancho Gonzales and Ken Rosewall.

Also, Roger has written the record books as the only player in the Open era with 19 quarter-finals at a single event, previously sharing the record with Jimmy Connors, who did that at the US Open. Returning at Wimbledon after a rough year and a half, Federer defeated Adrian Mannarino, Richard Gasquet, Cameron Norrie and Lorenzo Sonego to find himself into the last eight, stopping the clock once again and proving his everlasting class.

Sonego fought well in the opening two sets, but Federer was always the favorite under a roof caused by the rain. The Swiss fired 32 winners and 26 unforced errors, getting broken once in the opener and keeping the pressure on the other side of the net since then.

The opening set was mighty close, and it almost went down to the wire. Lorenzo survived three break chances in the fifth game to remain on the positive side before placing a loose forehand at 3-3 to send Roger in front. Serving for the set in game ten, Federer lost ground completely and suffered a break at love to offer Sonego a second chance.

Roger Federer is through to his 18th Wimbledon quarter-final.

Keeping his composure, Roger survived Sonego's four game points at 5-5 before converting the fourth break chance once they return from the rain delay to forge the advantage.

Federer had to work hard again in the 12th game, saving a couple of break chances and wrapping up the set after an hour for a massive boost. Dominating under a roof in set number two, Roger lost five points behind the initial shot and earned one break.

At 2-2, the Swiss landed a forehand winner to secure a break and clinched the set with a hold at love in game ten for a heavy advantage. Doing everything right behind the initial shot, Roger dropped four points in his games in set number three, forcing the opponent to follow that pace if he wanted to stay in contention.

Federer raced into a 4-0 advantage and secured the victory with a service winner at 5-2 that carried him into the 18th Wimbledon quarter-final. 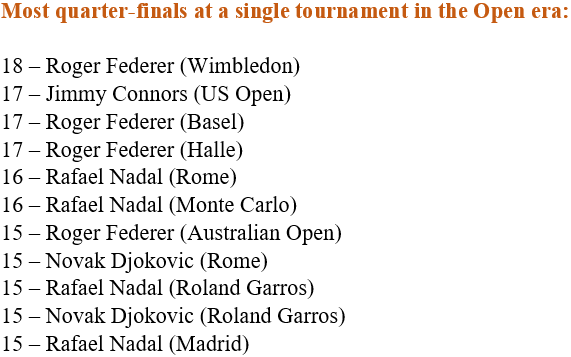