Tennis - Former world no.1 doubles player Gigi Fernandez is upset with the All England Club for not inviting her and former partner Natasha Zvereva for the invitational legends event at Wimbledon this year. 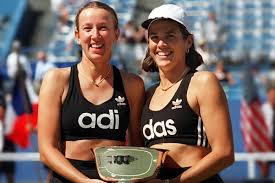 Fernandez sent this tweet to her followers on Twitter earlier today - Congrats to Novotna and schett on senior's @wimbledon, but how did Selima get an invite and Natasha and I get snubbed? 14GS v 0 titles.

Hhmm Fernandez won 17 Grand Slam doubels titles in her career, 14 of them with Zvereva, in her career and also reached the semi-finals of the singles event at Wimbledon, peaking at no. 17 in the rankings. While the legends event this year featured some true greats of the game such as Martina Navratilova, Lindsay Davenport, Jana Novotna and Mary Joe Fernandez, it also included some lesser known players such as Selima Sfar and Andrea Tamesvari.