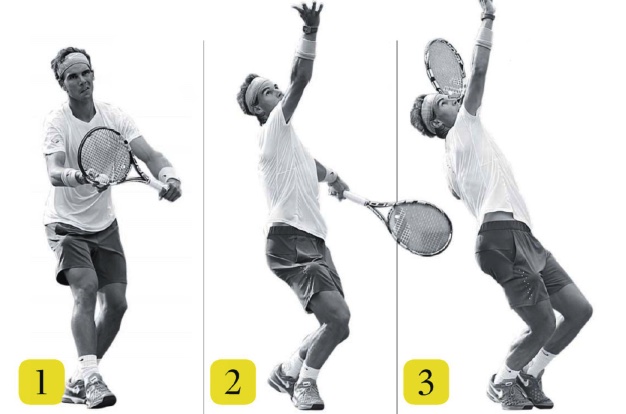 LESSON 1
I’ve never seen a professional improve his serve as much as Rafael Nadal has since he came onto the tour. He used to hit his serves barely over 100 mph, now he consistently reaches the 120s.

He also has more spin and better placement. There have been many changes and tweaks, and there’s a lesson here for club players: Don’t be afraid to experiment. The serve is one of the easier things to change because the ball is in your hand.

LESSON 2
This extension, along with a Continental or Eastern backhand grip, is a must. An inconsistent toss makes for an inconsistent serve. The best part about the serve is that the ball is in your control. Don’t let the ball dictate how you serve; you need to dictate to the ball. You need to get your arm away from your body, as Nadal does here, and release the ball at full extension.

Don’t fl ick your wrist. As Nadal takes back his racquet, the strings face down toward the court and the palm of his hitting hand points down.

LESSON 3
Club players and even some professionals make a mistake by bringing the back foot too far to the side or too far forward, so the foot is no longer behind the front foot. When this happens, you face the net prematurely and open up before uncoiling into the serve. You want to be like Nadal, with the back foot still behind the front foot. His feet are bent at the same angle as his knees. If you transfer your weight to your front foot too soon, you will start to fall into the court, and you’ll lose energy. 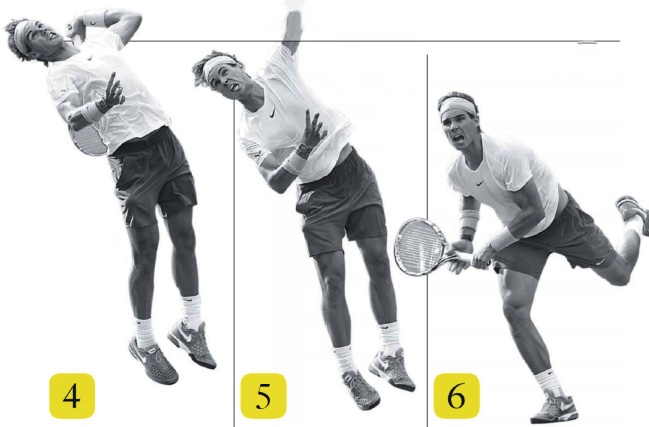 LESSON 4
On the serve, timing is everything, and many club players get the most important element of timing wrong—people drop their racquets too soon. On a serve, the legs create racquet-head speed. And it’s the legs driving up that force the racquet down, where it essentially rebounds and then whips up at maximum speed. Notice that as Nadal’s legs drive up toward the ball and his feet push o the ground, his racquet is still down with the butt cap in the air.

LESSON 5
When you’re serving, you want to feel as if you’re throwing your back hip up and out into the court. That’s going to trigger an aggressive cartwheel-type movement. You can see Nadal doing this here. When you serve, it’s a bit like throwing an axe. First, the edge of the racquet comes in, then it goes out, and then your arm turns (pronates). Nadal brings his right arm across and in front of his stomach to stop his hitting shoulder from over rotating. It acts like a brake.

LESSON 6
A great serve sends you into the court and in position for a split-step. You can see on Nadal’s face that he’s already reading where his opponent will return the ball. Even with a great serve, it’s best to be like Nadal and always think one step ahead.

RELATED: Serve on the Edge

TODAY'S MOST POPULAR
Rafael Nadal tells a funny anecdote about the 2008 Wimbledon final
THIS WEEK MOST POPULAR
The most beautiful players of the last decade - Djokovic, Wozniacki, Nadal and...
Powered by: World(D) 1.6