In modern tennis, moving forward is a trend. We’re not about to go back to the serve-and-volley era, but today’s top pros are finding more opportunities to approach and shorten points, because baseline rallies have become so taxing.
This makes the topspin lob an essential shot for your arsenal, and it’s a shot that can help players at every level.
When people hear the word “lob,” they immediately think, “defense.”

Sure, a lob is a great shot when you’re in a desperate situation. But it’s also a fantastic neutralizing shot, or even a weapon, if hit with precision in the right circumstances.

If you’re playing against someone who likes to finish points at the net, there times when you are too deep in the court, or too wide, to hit an e ective passing shot. This is the perfect time for a high percentage, aggressive lob. Especially when playing against the wind, the lob might be the preferred shot, because the combination of topspin and wind makes this shot even safer.

I’ve found that players rarely use the lob because they don’t understand how e ective it can be, especially with all the spin modern racquets and strings can produce. The offensive lob is a fantastic shot that’s not di cult to master. Incorporate it into your routine and you’ll see how much easier it is to keep attacking players on their heels. 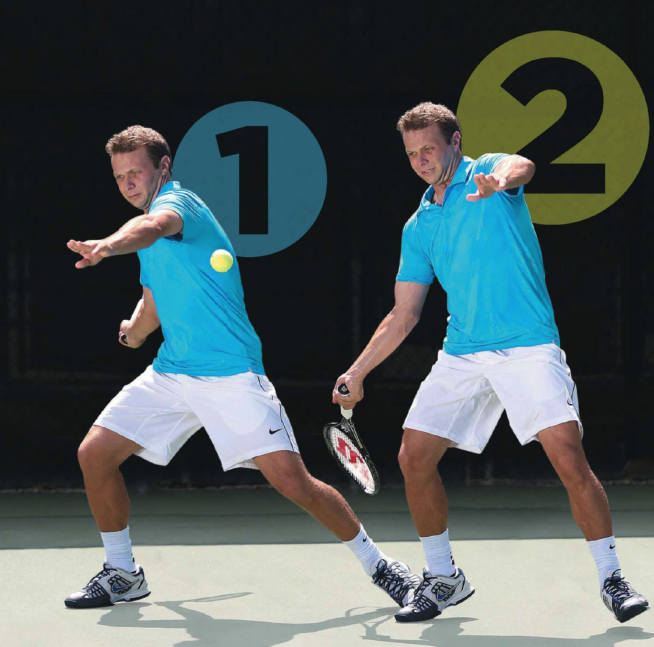 Here, the player is well behind the baseline, too far to hit a high-percentage passing shot. But he’s not in a totally defensive position, either. This is the ideal time to hit an offensive topspin lob. To hit an effective one, use an open stance and a strong shoulder turn. Notice how he has both opened up his left foot and turned his left knee in. This allows for great shoulder rotation.

On an aggressive lob, you must drop the head of the racquet more than you would on a regular shot.

Here, the racquet is down below the knees and the swing path will be more extreme low-to-high than on a regular forehand. Still, many of the mechanics of a good forehand still apply. The butt cap of the racquet points at the target and the shoulder begins to rotate but does not open up too soon. 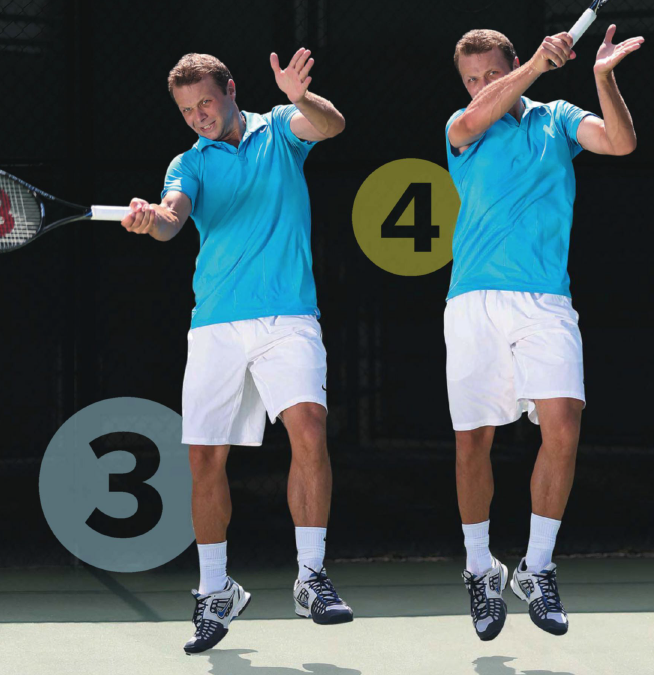 On a traditional forehand, your weight should move forward into the shot. Here, though, the weight transfer is vertical, much like the exaggerated low-to-high swing path. To get maximum air under the ball, and a lot of topspin, you must brush up the back of the ball with lots of racquet-head speed. Your swing will transfer your weight up.

Your hips and shoulders should rotate with upward momentum through contact. All the energy from the strong shoulder turn has been channeled into the ball through a low-to-high swing that will send the ball high into the air and over the opponent’s head. The eyes will follow the path of the ball, anticipating your opponent’s response. The racquet is well above your head because of the upward path of the swing. 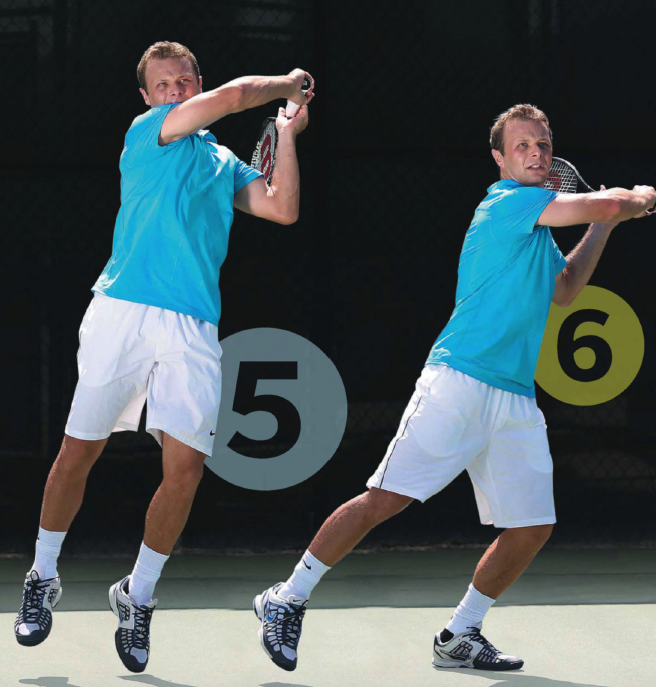 The momentum of this swing will naturally bring your hips around and shift your weight to your left foot (if you are right-handed). This is great preparation for the next shot, as your weight will be moving toward the middle of the court. The core is strong and the head remains still. Great balance is key not only for the swing, but also for the recovery. You don’t want to be falling over after hitting this shot.

A note on the topspin lob follow-through: The modern windshield wiper finish usually doesn’t apply. Because this is such a low-to-high swing, you’ll finish higher than normal. From this position, you can hold your ground, move in either direction, move forward for a more aggressive groundstroke, or even charge the net if the ball clears your opponent’s head and lands deep in the court. With just one shot, you can transition from a slightly defensive position to an offensive one.

TODAY'S MOST POPULAR
Roger Federer, Nadal and Djokovic: find the mistakes in the banner!
THIS WEEK MOST POPULAR
When Roger Federer paid homage to Kobe Bryant with personalized shoes
Powered by: World(D) 1.6