As tennis enthusiasts and professionals are aware, the season’s first Slam takes everyone to Australia to a tournament that embodies a very special charm. But the 2020 edition of the Australian Open stands to bring new problems because of the adverse climatic conditions and bush fires that have caused devastation and have exterminated millions of animals, including very rare species, alongside old problems that recur every year like the torrid heat greeting certain days in Melbourne.

Starting from 2015, the rules (heat rules) to stop the matches in case of extreme heat conditions have come to be at the discretion of the organizers. The matches can be suspended without waiting for a set to end if the weather hits a certain peak.

The matches will therefore be suspended when the temperature hit 40°C or 32.5°C in particular cases of extreme humidity. But what really changes on a physical level when you are called to play in such climatic situations? What are the conditional parameters and the difficulties encountered in on-field performance? A 2015 scientific study researched on what were the parameters to consider, and possibly control, for competitions that took place in conditions of high heat.

During these competitions, with heat, the blood flow off the skin and the speed of sweat increase to allow dissipation of heat into the surrounding environment. These thermoregulatory adjustments, however, increase physiological exertion and can lead to dehydration during prolonged exercise.

Heat stress alone will impair aerobic performance (endurance on the pitch) when hyperthermia occurs. As a result, athletes carry-out their exercises (technical-tactical, physical and mental) at a slower working speed than in temperate environments.

In addition, dehydration during exercise aggravates thermal and cardiovascular tension, and further compromises aerobic performance. Muscle cramps, dizziness, nausea and vomiting are further risks that can occur. But is it possible for players to prepare, for example, during off-season, under these scenarios? Nowadays, players carry out almost all their preparations in warm places, or in any case play preparator tournaments where climatic conditions are very similar to those found in Australia.

Precisely for this reason, they train to have a so-called state of acclimatization to heat which will be fundamental during their matches. This state needs to be recreated for at least six to ten days to ensure that there are correct cardiovascular adaptations and increased skin sweating.

We also know that there are some strategies to avoid unwanted events as much as possible. In this case, a 2018 study by Lynch, et al., comes to our rescue. The study carried out during the Australian Open investigated what the factors may be that could be potentially problematic.

They are mainly related to hydration (fundamental are mineral salts, electrolytes, carbohydrates, sodium supplements) before, during and after training sessions and matches, but also throughout the day, and to cooling strategies (ice baths, cryo-baths, cooling vests, ice towels, refreshing creams, fans). 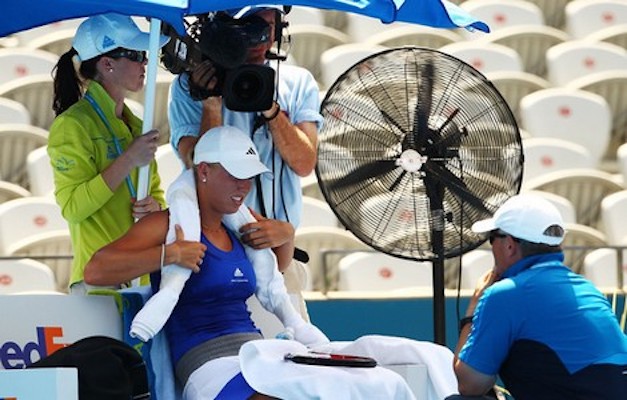 Returning to the field and to the match, a study by Smith et al., in 2018, which analyzed 360 women's matches at the Australian Open between 2014 and 2016, showed how problems started to emerge once the temperatures rose above 30°C with increases in medical calls, fewer winners and volleys at the net and a greater number of double faults.

In the men's field, problems may be even greater given they play best of three out of five sets, and the corresponding increase in the average duration of the matches. These issues should not take one aback and are part of those training processes that are invisible but which, in these cases, can make a difference.

Hoping that the Australian climate will be mild with the players during the two weeks of the Aussie Slam, we can't wait to start another fantastic year of tennis.