We are getting closer and closer to the crucial phases: there are just 21 tournaments left at the end of the first edition of the Tennis World Tour, a maxi-initiative launched last September by the Tennis World Foundation with a dual objective: to raise funds for charity and to encourage tennis activity in South Africa, especially after a very hard period following the COVID-19 pandemic.

The tournaments are divided into different categories: the youth events range from the Under-10 to the Under-16 categories, then there is the Open category, open to all without age limits. Each of these will have its Masters at the end of the year, to seal a real marathon of events.

The advantage of these tournaments is that they have a very agile formula, which allows them to be closed in a couple of days. On the weekend of July 31st -August 1st, the young people returned to the field, and it was a particularly happy two days, with a record membership: over 60 participants.

Here are the highlights of each board. Among the youngest (in the under-10 category) was Alex Pieber, one of the many boys of the Tennis World Academy, managed by Federico Coppini and his staff at the Van der Stel Tennis Club in Stellenbosch.

Pieber's success is very important in terms of the classification, because he has brought himself close to the leader Boris Radkov, now only 45 points away: 2580 against 2525. This promises to be a neck and neck race to the finish. 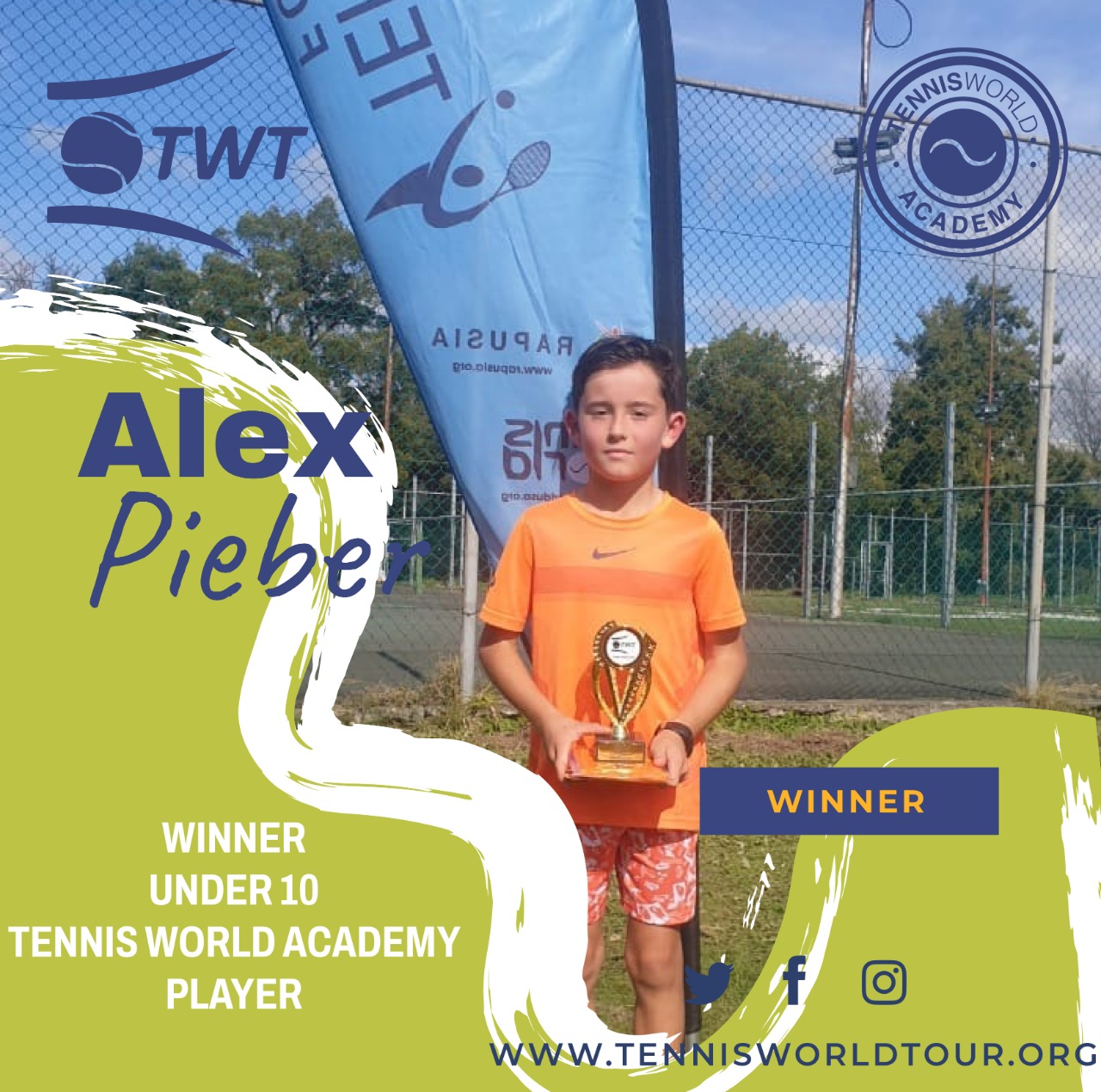 Another Pieber triumphed in the Under-12 scoreboard: Ethan Pieber won the 600 points reserved for the winner by beating Giacomo Coppini in the final, who is also the leader of the general classification. It was a beautiful and balanced final, closed at the super tie-break. 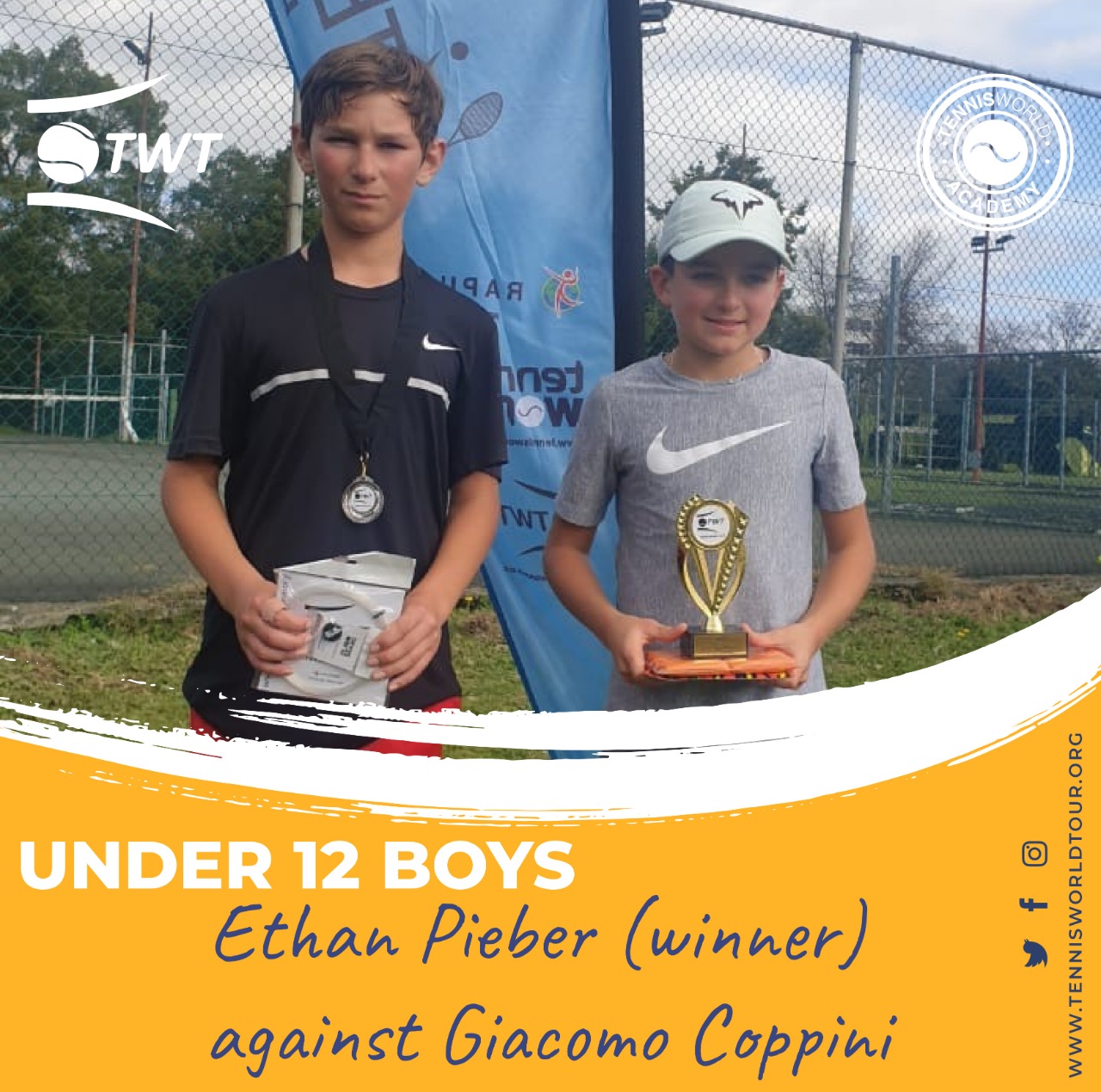 The most intriguing tournament was the boy’s Under-14 category: great joy for the TWA, as the title went to Zachary Parsadh, a 14-year-old from Stellenbosch who played a spectacular final against Dehan Van Deventer.

Parsadh won 6-2, 6-2 and this win has a great value, because Van Deventer (despite being two years younger) is an athlete of national interest, being among the best South African Under-12s. 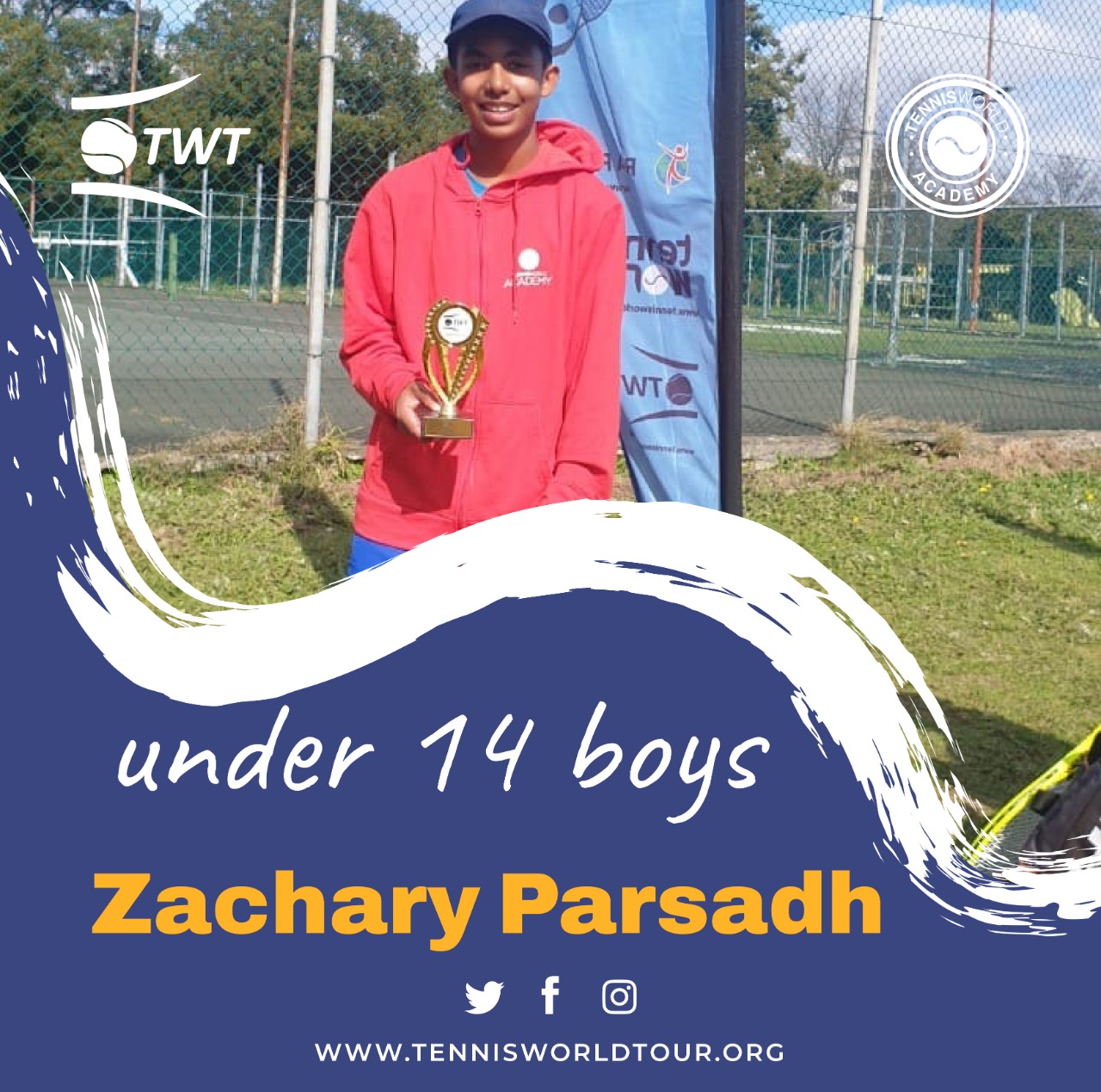 The noble Van Deventer sank his teeth into the challenge in Stellenbosch, since in the first round he had to sweat the proverbial seven shirts to beat Oyama Fikiso, another boy from the academy (as well as a "pure" product of the Tennis World Foundation) who surrendered only at 10-8 at the super tie-break.

There were great battles in the Under-16 draw as well, in which Parsadh fell short of pulling off a sensational double by the smallest of margins. His adventure ended only in the final, at the end of a hard-fought match, against Cebo Faleni, 7-6 7-6. 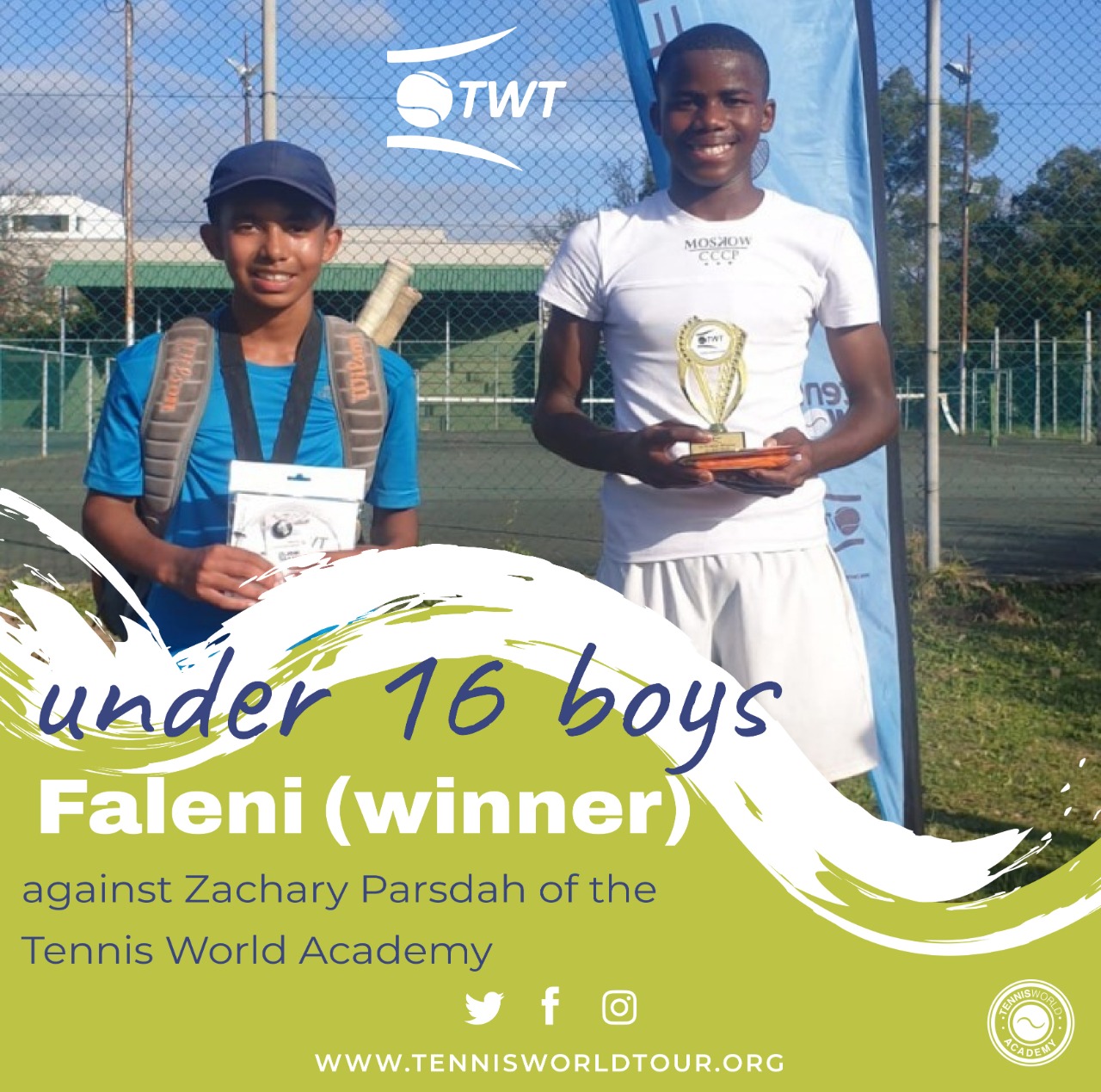 The technicians of the Tennis World Academy can, however, be satisfied with the impetuous growth of Parsadh, who is making himself known throughout the area thanks to the results. It’s also important to note the beautiful victory of Giacomo Coppini in the backdraw (the tournament reserved for the losers in the first round): it is appropriate to do so because Coppini is just 12 years old and has beaten opponents who are three-four years older than him.

And at that age, you know, it's a noticeable difference. The girls were also on the field, with a nice Under-14 scoreboard. It was the only tournament in which the Tennis World Academy did not place a player in the final, but there is an explanation: the starlet Shiloh Daniels, who is literally dominating the category, was missing in action.

Suffice it to say that she leads the general classification with thrice as many points as the player’s who’s placed second. In her absence, the category is open to any solution: 12-year-old Emily Simmons won in the final over Tineke Louw, who is a year older than her, 6-4, 6-4.

Even in this case, however, the level of the tournament was very good. 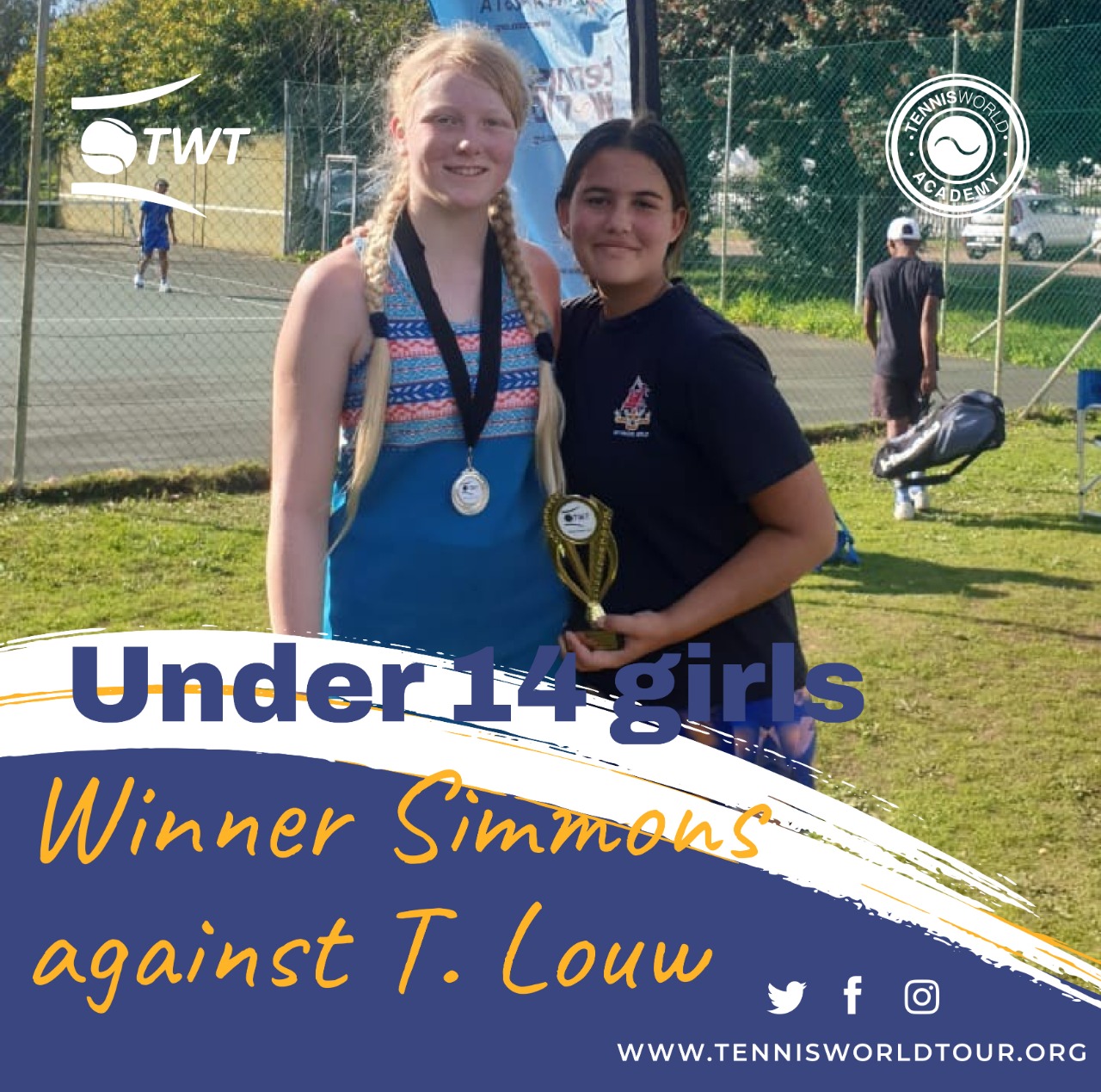 Generally speaking, the overall quality of the scoreboards is growing month after month. We’ll close by sharing the numbers: 474 players have participated in at least one of the 67 tournaments.

To date, 36,286 Rand have been raised. This last figure is the most important because it reminds us that a simple tournament circuit can be a tool to make the world a better place. After a few weeks off, the TWT will restart on the weekend of August 28 for another round of youth tournaments. Because they, the children and young people, are the brightest hope for a better future.