The Tennis World Tour is getting underway. After the launch of the initial tournaments in early September, the Van de Stel Tennis Club in Stellenbosch has welcomed two other events whose goal is to gather as many players as possible, create friendships and relaunch the business after the very tough lockdown period.

But there is also a strong competitive component thanks to the agreement reached with UTR (Universal Tennis Rating), an initiative that is enjoying enormous success on a global scale. Sponsored by Oracle, the company owned by multi-billionaire Larry Ellison (who also owns the BNP Paribas Open in Indian Wells), UTR is a system for evaluating the level of every tennis player, from the no.

1 in the world to the last of the beginners. The method is very simple: the level of each player is based on the score obtained in the last 30 matches played, limited to the last twelve months. But every match has an importance: the score is obtained based on the quality of the opponent and the number of games won.

In this way, an objective evaluation is obtained on a scale of values ​​ranging from 1 to 16.5, i.e. from beginner to professional. Thanks to the effort and work of Federico Coppini, organizer of the Tennis World Tour and the creator of the Tennis World Foundation project, South African tournaments have value in calculating the participants' UTR.

Two tournaments were played on the weekend of 18-20 September, one reserved for the Under 15s and the other, open to all. Let's start with the youth event: there were 14 participants, divided into four groups of three.

All South Africans except the Italian Giacomo Coppini and the 14-year-old Bulgarian Kalo Radkov: the latter was the surprise of the tournament, going all the way to the final. Among other things, in the semi-finals he beat 11-year-old GN Shrives, against whom he had lost the round-robin match.

In the final, however, he surrendered to South African Kim Sunwoo, a player who is a year older than him. However, the final was decided at the super tie-break, won 10-4 by Sunwoo. The Under 15s will be played again at Van de Stel on the 16th October. 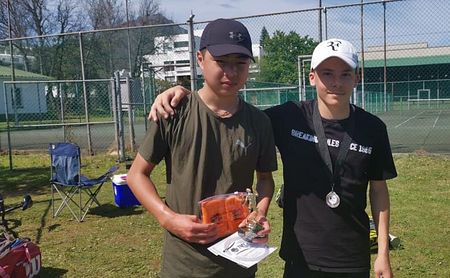 In the Open tournament, without age limits, there were 16 players. The final success belonged to South African Wade Hermanus, who won the title without losing a set in the whole course. In the round robin, he didn't even leave a single game to his opponents.

Curiously, in the semi-final he beat Federico Coppini, who trains him and follows him around the tournaments.
The match ended with a double 4-2, but it is to be believed that Coppini is fully satisfied with the growth of his pupil, who will turn eighteen next January 17th.

With these successes, Hermanus has secured the leadership in the men's rankings. But there is still a lot to play, as between now and the end of the year the Tennis World Tour will host an impressive 6 tournaments, and it is not certain if more tournaments will be added.

The project got off to a very good start, not only because of the good number of members but also from an ever higher technical level. The hope is that the TWT, part of a very different program, can improve the quality of life of those who attend it and – why not – be the springboard for some young promises.