March 2021 was a particularly prolific month for the Tennis World Tour. As is known, it is a long charity circuit, started in September 2020 and which will thoroughly colour the Van der Stel Tennis Club in Stellenbosch (and others) in 2021.

There are tournaments of various categories, both youth and Open, and each of them will end with a Masters for the eight best players. The funds are used to finance the activities of the Tennis World Foundation, and the good news comes from there: in recent weeks, the number of players has grown dramatically: with 60 new participants, 355 tennis players have contributed to the success of the initiative.

The amount raised has then exceeded 30,000 South African Rand. At the time of writing, the piggy bank contained 31,636 Rand. In an atmosphere full of smiles and satisfaction, the weekend of March 20-21 hosted a series of youth tournaments, from the new addition of the Under-9 category, up to the Under15 category, with the great news of the doubles tournament.

This round had a great protagonist: the very young Dawid Fourie, a 10-year-old boy (his 10th birthday was on December 3), who trains at the Tennis World Academy and who completed an extraordinary double win. In his age category (the Under-11) he won the title by beating Jason Newell (winner of the last tournament) in the semi-finals and Giacomo Coppini in the final, both with the score of 4-1, 4-1.

Curiously, he played the most complicated match in the quarter-finals, when he had to play 17 points in the super tiebreaker to get the better of Jamie Roux. But Fourie’s real feat came in the Under-13 tournament, in which he confirmed a very rapid development.

In the final he overtook his peer Ethan Pieber with a score of 4-2, 4-3, but along the way he had beaten two opponents (De Villiers and Burger) older than him. Two years apart, at that age, means a lot. If Fourie can already beat those born in 2008, well, it means he's growing up.

More generally, all the baby tennis players of Federico Coppini’s academy are having great success: of the five singles tournaments played over the weekend, four were won by those who are part of the academy. The only draw where success was lacking, however, the Tennis World Academy entrant was placed the finalist.

It was Paul Roos who, in the Under-15 stage, surrendered to Luke-John Els, a 13-year-old from Cape Town. The latter narrowly prevented an all-TWA final from taking place, as in the penultimate act he overtook Oyama Fikiso (one of the best players of the academy) in the best match of the weekend, a battle which he closed with a score of 4-3, 2-4, 10-8.

The first hierarchies are beginning to take shape also in the youngest age category: the Under-9. Last month the first tournament was played, with Alex Pieber's victory over Boris Radkov. The two found themselves in the final again this time, and the outcome did not change: the student of the Tennis World Academy won with a clear margin, 4-2, 4-0, adding to the gap of the previous tournament (when he imposed himself 4-2, 4-2).

In the women's field, the success of Shiloh Daniels is not new news. In the previous stage, the young South African had made herself the talk of the town after having won the tournament reserved for males. After handing Marita Bosman a 4-0, 4-0 loss, she did not need to take the field in the final against Lisa Du Toit, as the latter suffered from a back problem and wasn’t able to contest the match.

A pity, because there was great anticipation. Daniels is now a starlet (she has now won her fourth tournament in a row), and her matches are attracting more and more interest. Fans, however, were able to follow the 13-year-old from Stellenbosch in the doubles tournament, an absolute novelty of this TWT.

The organizers strongly wanted it, because it is a specialty capable of improving certain areas of the game that are not always stimulated in singles. Eight teams, male and female, answered the call and it was a very interesting tournament.

In the end, Roos-Burger won in the final against Daniel De Villiers and Shiloh Daniels. The experiment has garnered a lot of support and will go on with increasing frequency. 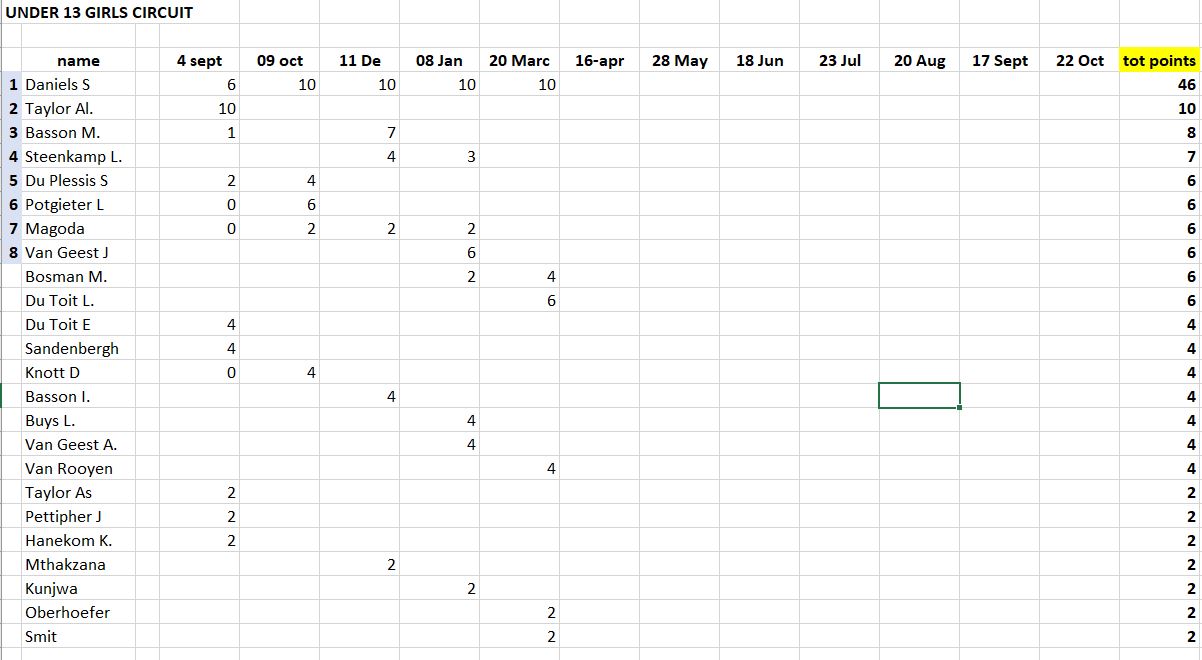 TODAY'S MOST POPULAR
RAFAEL NADAL
Rafael Nadal makes retirement admission after Wimbledon victory
Lorenzo Sonego makes big claim about playing Rafael Nadal on grass
Tamara Korpatsch tests positive for virus day after posting selfie with Rafael Nadal
Novak Djokovic answers if he is worried about potentially catching virus at Wimbledon
'If you tell him something, Roger Federer will...', says top coach
Stefanos Tsitsipas opens on his relationship with Mark Philippoussis
Nick Kyrgios: "If I had done that, I would have been fined"
John McEnroe not ready to write off Emma Raducanu after early Wimbledon loss
'Rafael Nadal got ahead on the scoreboard without...', says top coach
'Rafael Nadal had a few years in which he didn't play well on...', says top coach
THIS WEEK MOST POPULAR
WTA TENNIS
Wimbledon finalist physically harassed “at least 30 times” by staff, speaks out
Simona Halep opens on her relationship with Emma Raducanu
Rafael Nadal makes retirement admission after Wimbledon victory
Rafael Nadal responds to comments Serena Williams made about him
Jon Rahm and Rory McIlory change positions
Wimbledon 2022: ill for a ball boy, Jodie Burrage blocks the game and saves him
'I have beaten Rafael Nadal in all our matches on...', says former star
Three new names decided to perform at LIV Golf!
Rafael Nadal: 'I made a training disaster'
Rafael Nadal reveals measure he is taking amid growing fear of outbreak at Wimbledon