After collaborations with Nike, Adeam, Louis Vuitton, TAG Heuer, and many others, the Japanese tennis player Naomi Osaka announced a few months ago her collaboration with the Levi's capsule collection, which pays homage to her Japanese roots.

Naomi will not only be a stylist for this campaign, but also a model, and for a good cause. In fact, the collection that consists of four pieces will be in recycled denim. In detail, Naomi Osaka's clothing items will be kimonos with a matching obi belt, a pair of fringed Bermuda shorts, a pair of crystal fringed shorts and a back-tied bustier.

Regarding this role, Naomi said: "I have always loved wearing the kimono when I was a child and being able to create one in denim seemed to me something different and unexpected. The aspect of sustainability was very important to me so I like that each piece in the collection has been recycled or repurposed from old denim stocks." 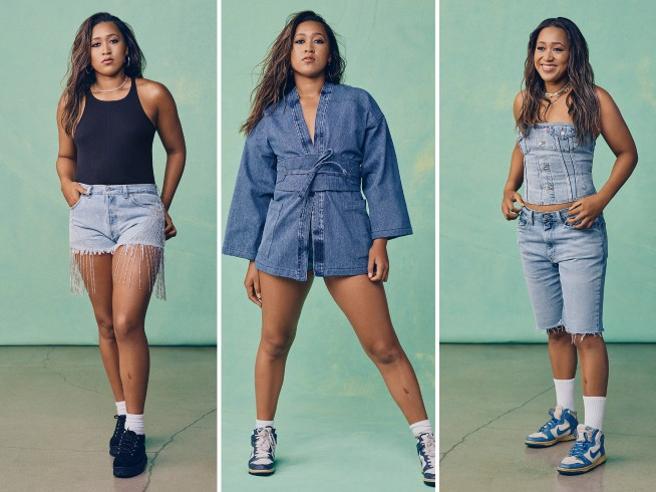 In Cincinnati, Naomi Osaka described her feelings and emotions of her while she is playing tennis and terrible things are happening in the world. Once again, the young Japanese tennis player has shown her sincerity and her generous nature in support of people affected by tragedies such as earthquakes or war.

Haiti, her father's hometown, was hit by a 7.2 magnitude earthquake, even more powerful than the one that caused hundreds of thousands of deaths in 2010. For now there are 724 dead, but there are still many people injured or trapped under the rubble waiting for help.

That's why Osaka has announced that she will donate the proceeds of her next winnings to help Haiti and the earthquake victims, again showing her good heart and her generosity. Naomi, after winning the Australian Open 2021, took part in the Roland Garros, where she overtook Patricia Maria Tig with a score of 6-4 7-6, but later, due to the pressure received from the organizers and the possible disqualification from the tournament due to upon the decision to cancel the press conferences, Naomi decided to retire before the second round match, which saw her opposed to Ana Bogdan.

In addition, the multiple Grand Slam champion was fined $ 15,000. She communicated her retirement di lei, with the return to the field at a later date, through the various social media. Osaka came back on the court in July at the Tokyo Olympics, where she was also the torchbearer who lit the Olympic brazier.

On that occasion she won in the first round against Zheng Saisai 6-1 6-4 and then against Viktorija Golubic 6-3 6-2. In the third round, however, she was defeated by Marketa Vondrousov for 1-6 4-6.

TODAY'S MOST POPULAR
RAFAEL NADAL
Uncle Toni: Nadal, Federer breathed sigh of relief after Djokovic lost US Open final
'Novak Djokovic needs to realise that his season was...', says former Top 5
Boris Becker: I have never seen Novak Djokovic so clueless
'Roger Federer and Rafael Nadal will retire soon', says ATP legend
Rafael Nadal: 'Things are more complicated because...'
Alexander Zverev reveals key element in his US Open loss to Novak Djokovic
Alexander Zverev praises Novak Djokovic: 'Stats are on his side, he is GOAT'
THIS WEEK MOST POPULAR
ROGER FEDERER
'Every match Roger Federer was cheering for me and sending...', says WTA star
Novak Djokovic: 'I don't know if I'm going to play...'
'It was a turning point in Novak Djokovic's career', says top coach
Cori Gauff: I don't regret throwing racquet but I regret that it almost hit kid
Rafael Nadal: 'In the future I don't want to be remembered as...'
Fontang: "Roger Federer and Nadal would have blocked many young players"
Rafael Nadal: 'I was in Barcelona with my team and...'