Shiseido WTA Finals Shenzhen will take place between October 27 and November 3, moving from Singapore and offering a record-breaking $14,000,000. Eight best players of the season will compete for the prestigious title and 1500 WTA points, with six players who have already confirmed the participation in Shenzhen ahead of the last two weeks of the regular season.

Roland Garros champion Ashleigh Barty is the top favorite to finish the season as the year-end no. 1, gathering 6476 points so far and leaving the closest rival Karolina Pliskova on 5315 ahead of Shenzhen. Naomi Osaka had struggled to find the form after the second consecutive Major crown at the Australian Open in January but that has all changed in the last couple of weeks, taking 1470 points in Osaka and Beijing to stand on 5246, with slim chances of finishing the year as the top-ranked player.

Still, the Japanese is the player to beat at the moment, standing as the favorite for the WTA Finals crown if she keeps the form from her last two events. Wimbledon conquerer Simona Halep is currently fourth in the Race, accumulating 4962 points and lingering just ahead of the US Open winner Bianca Andreescu who is 20 points behind her.

Simona has been struggling with a back injury just like in 2018, never finding form against after the All England Club and withdrawing from the next week's Premier event in Moscow, doing her best to get ready for Shenzhen.

Petra Kvitova is the sixth and so far the last player with the WTA Finals ticket, 400 points ahead of the defending champion Elina Svitolina who is safe in the seventh at the moment, looking to cement the position in Moscow as the top seed and fight for the WTA Finals crown again, having massive 1500 points to defend.

Serena Williams is almost certainly out from the rest of the season, leaving Kiki Bertens as the last player who would qualify at the moment, especially after a surprising loss of her only rival Belinda Bencic in the opening round in Linz.

The Swiss now has to ask the wild card in Moscow if she wants to stay in contention for Shenzhen but the field for the WTA Finals looks completed at the moment. WTA Race to Shenzhen ahead of Linz and Tianjin: 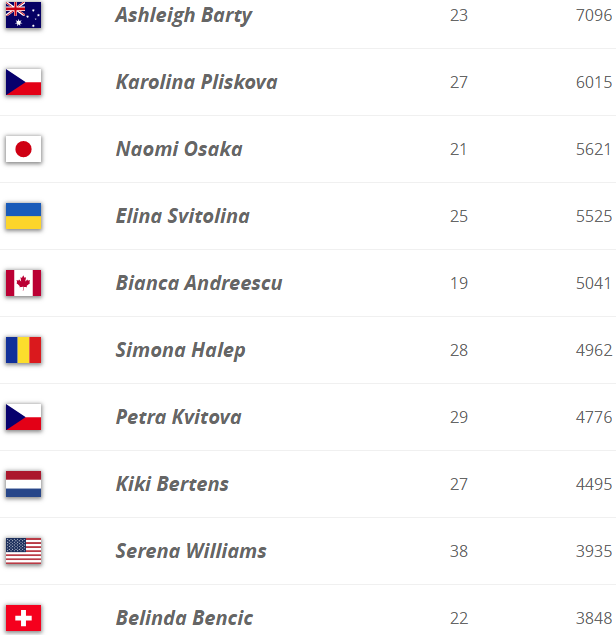 TODAY'S MOST POPULAR
Why Novak Djokovic's biggest career defeat is the coldness of the crowds?
THIS WEEK MOST POPULAR
Alexis Ohanian reacts to Serena Williams' racism post: “We need to do better”
Powered by: World(D) 1.6