With the Palermo Ladies Open, the WTA Tour restarts after five long months of stop due to the global Covid-19 pandemic. From 10 to 16 August there will also be two other events: the WTA in Prague and the WTA in Lexington, two International tournaments that will anticipate the double appointment in New York with the Western and Southern Open and the US Open, both scheduled at Billie Jean King Tennis Center in Flushing Meadows.

Simona Halep, who after the decision of the Italian Ministry of Health to force those who arrive in Italy from Romania and Bulgaria to quarantine, will not play the Palermo Ladies Open, but she is still on the Prague entry list and in all probability, even if it is still unknown if the world no.2 will play or not in the Czech Republic.

However, the Prague Tournament Entry List lost Belinda Bencic, a semi-finalist in New York a year ago, and who should return to the court for the double date at Flushing Meadows. 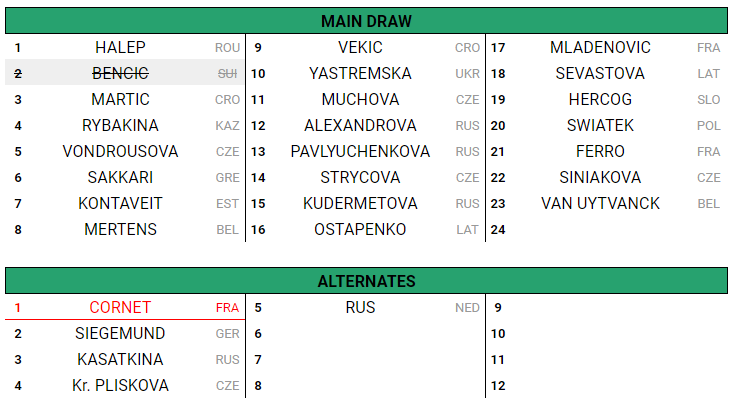 Cincinnati Entry List: Serena on the court, out Barty, Halep

Exceptionally this year the Western and Southern Open, combined ATP / WTA, will not be in Cincinnati, but in New York, in order to centralize tournaments on the American hard-courts only in one place, after the global pandemic hit very seriously the USA .

As for women's singles, five of the top ten players in the world will be missing, including the WTA ranking No. 1 Ashleigh Barty and the No. 1. 2 Simona Halep. Out also Bianca Andreescu and Elina Svitolina: five stars in doubt also for the upcoming US Open.

Barty had expressed his doubts as early as early June, while Halep had already chosen to play only in Europe. Andreescu didn't play a match from the Shenzhen WTA Finals last October when he had to retire due to a knee problem.

The absence of Elina Svitolina is not a surprise: she said that she was worried about the situation of the infections not in New York, but in other States of the USA. Angelique Kerber seems not to have resolved her doubts about the trip to New York.

There should be Serena Williams instead. Also present are Sofia Kenin, Karolina Pliskova, Kiki Bertens, Belinda Bencic, Petra Kvitova, Johanna Konta, Garbine Muguruza and Cori Gauff. These are the absences related to the Western and Southern Open: For now there is no news regarding the US Open, although it could be probable that the tennis players who will not play Cincinnati could also decide to skip the New York Slam